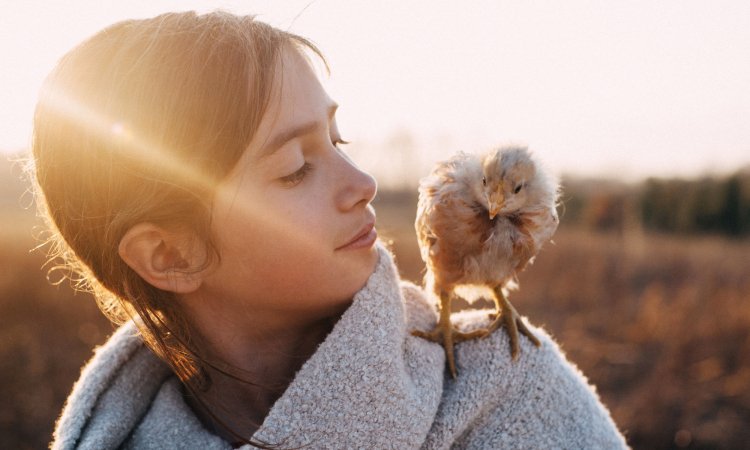 Chickens, like many other animals, are resplendently different from one another. They can be therapy birds, worried mothers, helpful friends, impressive memorizers, and more, says anthropologist and writer Barbara J. King.

Mr. Henry Joy was a small and unassuming bird. But when he rode through the Golden Living Center nursing home in Charlotte, North Carolina, in his basket, people came to know they were in the presence of an unusual personality. Center resident Kathryn Black wasn’t much for socializing with people, but she warmed to Mr. Joy. “She would hold on tight to Mr. Joy like a teddy bear,” remembered Alisha Tomlinson, Mr. Joy’s caretaker and primary basket-bearer. “He never once squirmed or flapped his wings in protest. He just seemed to know that she was frail and meant him no harm.”

Mr. Joy was a therapy chicken and, by breed, an Old English Game Bantam, a variety of rooster that tends toward small sizes. (Male chickens over one year old are called roosters.) White except for a bright red comb and wattles, Mr. Joy was raised from an egg by an elderly man named Mr. Wallace. He had a certain reputation for crankiness, but he was different with Mr. Joy. Mr. Joy perched on Mr. Wallace’s shoulder during chores, and they sat close together when the man watched television. They were inseparable, a fact that was a source of great pleasure to Mr. Wallace.

Of her rooster-turned-therapy-animal, Alisha Tomlinson says, ‘Mr. Joy had to spread the message: chickens are sentient, loving creatures.’

It’s pretty clear that Mr. Joy’s comfort with people generally originated in these interactions. When humans raise animals from babyhood, the effects on the animals’ subsequent behavior may be profound, as we’ve known since ethologist Konrad Lorenz’s famous imprinting experiments with greylag geese starting in the 1930s.

When Mr. Wallace went into a nursing home, Mr. Joy had the good luck to be adopted by Tomlinson. A number of events then unfolded that reinforced Mr. Joy’s people-oriented tendencies. First, Mr. Joy fell ill with a foot condition, a state of affairs that ensured he was fussed over by Tomlinson. During his recovery, he began to ride in a basket, transport he found entirely satisfactory. Around this time, Tomlinson brought him with her to visit a bedridden woman. The effect of Mr. Joy’s calm and agreeable presence was so great that Tomlinson launched his career as a therapy chicken almost immediately: “It was then I knew I couldn’t keep his charms to myself. Mr. Joy had to spread the message: chickens are sentient, loving creatures.”

Tomlinson described how “present and alert” Mr. Joy was to events around him. He had preferences, like all sentient creatures do, and vocalized in ways that conveyed his moods of surprise, fear and joy. For some reason, Mr. Joy despised anything on wheels and rushed after and pecked at any cart or stroller that came near him.

Chickens are domesticated animals. But unlike, say, cats and dogs, individual chickens rarely have their stories told the way Tomlinson enjoys telling Mr. Joy’s. In North America and Europe, chickens are usually imagined as most live now, in industrial farms, densely crowded together and seemingly indistinguishable.

But chickens can be resplendently different one from the other. That was apparent when I made six hen acquaintances at Wilder Ranch State Park near Santa Cruz, California, in 2015. These beautiful birds lived in an outdoor coop outfitted with a swing for exercise. During my visit they were turned out into a vegetable garden; one sunbathed and several foraged. Some invited human interaction, and others did not. I gently picked up Bella — so white, so soft — and held her against my chest in an encounter that I enjoyed greatly and that Bella seemed to soak up as well.

In impressive feats of memory, chickens keep straight over 100 chicken faces and recognize individuals after months of separation.

Unless we raise them, chickens are probably more familiar to us as 10-piece nuggets at the local McDonald’s than as animals with thoughts, feelings and personalities. But recent exploration of chicken behavior and cognition is gradually bringing back a more nuanced awareness of their lives.

If chickens are “birdbrains,” that derisive term deserves a shiny new connotation. In impressive feats of memory, chickens keep straight over 100 chicken faces and recognize individuals after months of separation. They reason out the best outcome when given two choices: hens trained to peck colored buttons chose 9 out of 10 times to forgo an immediate (lesser) food reward for a slightly later (greater) reward.

In studies, hens show sensitivity to their chicks’ skill levels. Veterinary scientists Christine J. Nicol and Stuart J. Pope demonstrated this in an ingenious way with experiments using palatable and unpalatable foods. Nicol and Pope knew some key things about the foraging of hens and chicks from prior research: New hatchlings can’t distinguish between food and non-food items, so they peck at both. Hens attract the chicks to food items by food calls and pecking motions, and give longer, more intense calls for food that they perceive to be of higher quality. Nicol and Pope wanted to know how 12 hens would respond if they observed their chicks choosing unpalatable foods.

When they perceived their chicks to be threatened, the hens increased their vocalizations and walking, and showed signs of stress-induced hyperthermia.

In collaboration with veterinary scientists J.L. Edgar and E.S. Paul, Nicol showed in another study just how attuned to their chicks hens can be. The trio had previously demonstrated that hens who witness their chicks experiencing harmless but unpleasant air puffs showed increased alertness, vocalizations and heart rate. The conclusion from that work was plain: Hens were aroused when observing their chicks undergo mild stress. In a parallel to the Nicol and Pope study, this study asked: Did the hens feel distressed themselves because the chicks acted distressed, or did they acquire knowledge about the situation that affected their own cues?

When hens perceived their chicks to be threatened, no matter what the chicks were doing or the signals the chicks were sending, they increased their vocalizations and walking, and decreased their preening. The experimenters discovered this by conditioning a dozen hens to associate a particular location with danger, specifically with administration of an air puff. Even though the chicks experienced no danger (they were never air-puffed in this study, just as earlier no chicks were given unpalatable foods), the mothers’ behavior changed in the ways described when they observed chicks in the “dangerous” area.

This isn’t to imply that chick cues don’t matter at all: the hens showed signs of stress-induced hyperthermia, measured by temperatures in the head and eye, when their own expectations caused the chicks themselves to exhibit distress. The chicks “spent more time producing distress vocalizations and less time preening when they were in the coloured box that the hen had been conditioned to associate with danger,” the experimenters report.

Sensitivity to the state of others isn’t confined to mother-chick relationships. A New Hampshire women named Ellen Chase recounts what happened when one of her dozen mixed-breed hens went blind. A second hen took on the role of companion to the first. This helper hen followed the blind one around, roosted next to her even though the blind hen would bed down for the night at an unusually early hour, and once dropped a worm in front of the blind one and left it there for her.

A neuroscientist has found that avian brains, including those of chickens, are as lateralized as our own — the right and left hemispheres divide up tasks.

However, Chase’s tale wasn’t all happy endings. The least dominant hen in the group, whom she describes as “fearful and isolated from her short lifetime of harassment,” assumed a new boldness once she realized that her now-blind group-mate was in a weakened position. “All her pent-up anger,” Chase writes, “came out in merciless attacks, random and unprovoked.” Sometimes others defended the blind one from the assaults, but mostly they did not.

Chase’s flock seemed to include both an empathetic altruist and a smart, formerly oppressed hen who wished to join the ranks of the oppressors, plus other birds who remained relatively indifferent to a blind member (but who no doubt expressed their distinct personalities in other ways).

Both experimental and anecdotal evidence tell us about chickens’ ability to take in and act upon another’s perspective. What then goes on in the chicken brain? Quite a lot. Neuroscientist Lesley Rogers has found that avian brains, including those of chickens, are as lateralized as our own, meaning the right and left hemispheres divide up some tasks rather than duplicating the work necessary to accomplish them. Rogers was the first to discover lateralization in the chick forebrain, and she did so at a time when cerebral division of labor was assumed to be uniquely human (it is, we know now, common in vertebrates).

By comparing chicks who were lateralized with chicks made visually non-lateralized through experimental intervention, Rogers showed that lateralization allows chicks to simultaneously find food (a left-hemisphere task) and attend to predators (a right-hemisphere task), a benefit of hemispheric specialization. The right avian hemisphere controls fear and escape responses, while the left takes charge of details.

The tired old dichotomy that mammals think with their neocortex and birds act on instincts rooted in their basal ganglia is inaccurate.

An international group of scientists going by the fabulous name the Avian Brain Nomenclature Consortium announced in 2005 that it was time to update century-old terms used for the avian cerebrum, to reflect new understandings of the neocortex-like functions of one part of the bird brain. That area, called the pallium, the consortium members wrote, “supports cognitive abilities similar to, and for some species more advanced than, those of many mammals.” The tired old dichotomy that mammals think with their neocortex and birds act on instincts rooted in their basal ganglia is inaccurate.

Two of the group’s points are crystal clear: Birds express behavioral complexity that is made possible by their brains, and the supposed gap in reasoning ability between mammals and birds is illusory. Examples of avian cognition offered by the authors range from feats of memory by scrub jays to tool use by crows. The question of whether these ornithology stars out-think chickens has not yet been properly studied. I suspect that biased assumptions are made about domestic chickens in the bird group as much as the consortium members say are made between birds and mammals.

Compared to plants and insects, chickens experience their world with heightened intelligence, sensitivity and awareness. The trick is to honor that fact in our food system as best we can in the present even as we strive to move away from factory farms in the future. If only there could be a team of Mr. Joys who’d fan out to industrial farms and bring comfort to all the chickens who live and die there now, anonymously, by the billions.

Reprinted with permission from the book Personalities on the Plate: The Lives and Minds of the Animals We Eat. Copyright © 2017 by Barbara J. King. Published by the University of Chicago Press. All rights reserved.

Barbara J. King is speaking at TED2019; her talk will be posted here as soon as it is available. 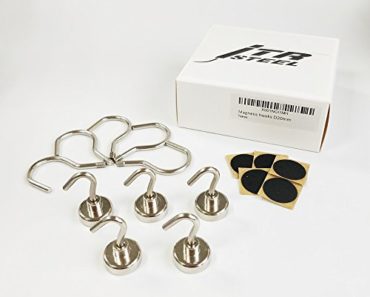 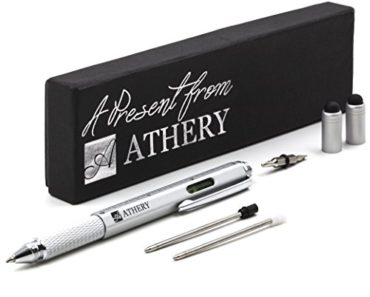 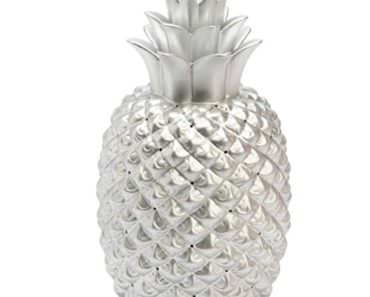