Home
Geek Universe
Who in the World Would Live next to an Active Volcano? | 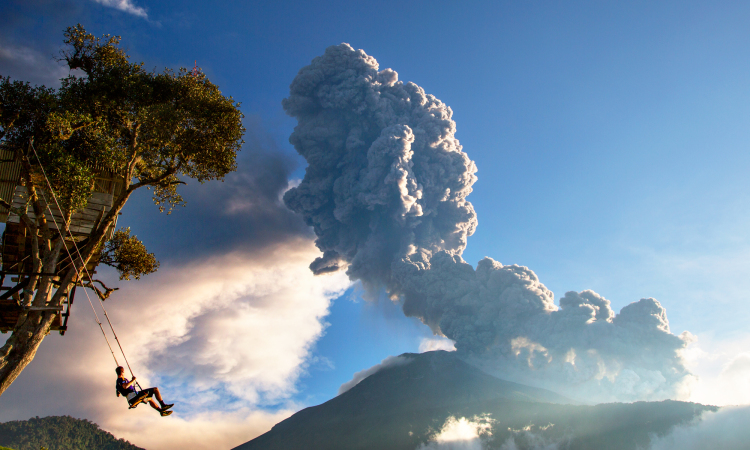 Volcanoes have a certain hypnotic appeal — but would you want one in your backyard? Photographer Cris Toala Olivares introduces us to the humans who co-exist with these unstable and sometimes deadly forces of nature.

In 2014, photographer Cris Toala Olivares traveled to Mount Tungurahua in central Ecuador to answer a question that intrigued him: Why do people live on active volcanoes? Little did he know this question would take him on an adventure around the world. He’s been to nine active volcanoes, most recently returning from Mount Paektu in North Korea this month.

As a self-described “street kid,” the Dutch-Ecuadorian Toala Olivares has always been interested in marginalized people, because he used to be one of them. It was when he started studying social work that his intense desire to understand humans and how they live and love made him turn to photography. What was once a hobby became a platform for him to share stories of people who live on the fringes.

While every volcano dweller has their own way of adapting to their lava-emitting neighbors, he says, “Every person who lives with a volcano has some kind of connection with this phenomenon that can destroy them.” Through his wildly beautiful photographs, Toala Olivares strives to document this complex relationship between humans and volcanoes. 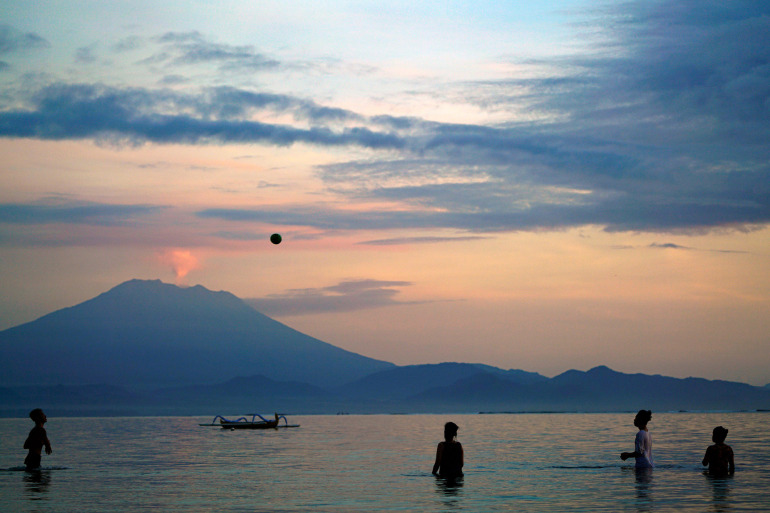 Here, a group of children play with a ball in the Bali Sea, as the 9,994-foot Mount Agung spits out smoke in the background. The volcano is an important part of the spiritual lives of nearby humans. “The locals believe Pashupati, an incarnation of the Hindu god Shiva, formed the volcano from part of Mount Meru, the spiritual axis of the universe,” says Toala Olivares. Since Shiva is one of the principal deities in the Hindu religion — her role is to destroy the world so it can be re-created again — one of the largest and most holy Hindu temples in Bali, Pura Besakih, was built on the slopes of Gunung Agung, or “The Great Mountain.”

But while Mount Agung holds immense religious significance for people, there’s an unavoidable tension between its holiness and its imminent danger. Agung let off a series of eruptions in June and July 2018, sending columns of ash and volcanic vapor up to 7,500 feet into the air, grounding flights and forcing hundreds of residents to evacuate their homes. 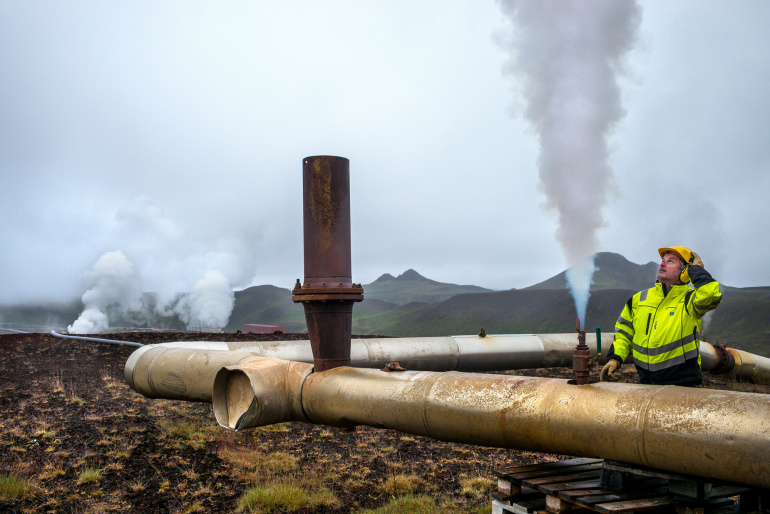 Because Iceland sits on a crack in earth’s crust where the North American and Eurasian plates are pulling apart, the nation is full of volcanic activity — it has around 30 active systems. Located near Lake Myvatn in northern Iceland, Krafla isn’t exactly a volcano; it’s a caldera, or volcanic crater resulting from the collapse of the volcano mouth. It’s also home to a geothermal energy plant; steam from beneath the earth at Krafla drives two powerful 30-megawatt turbines, providing power to the area.

In this photo, plant manager Steinn Agust inspects an outlet valve for hot steam near a borehole. Icelanders are, says Toala Olivares, “willing to take risks to find new sources of energy.” Today, geothermal energy is responsible for producing 25 percent of Iceland’s electricity. 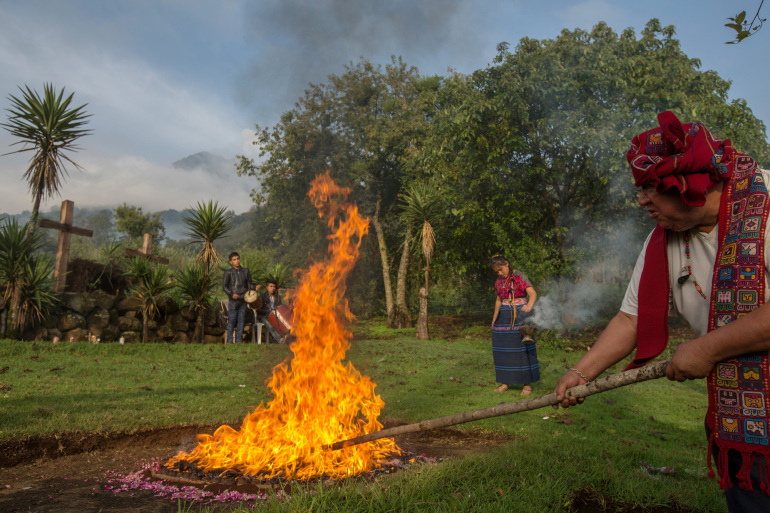 Mount Agua, Guatemala: A giant of a volcano sleeps — for now

Did Mount Agua really erupt with water, as its name would suggest? Not quite. In 1541, it generated a devastating mudflow that then caused a flood of water, and the two events combined leveled a settlement of Spanish Conquistadors. Since then, the towering, 12,340-foot-tall Mount Agua has been dormant, and most volcanologists agree the chances of an eruption anytime soon are slim.

The people shown here are in Antigua, Guatemala, the closest town to Mount Agua, or Volcán de Agua in Spanish. Antigua is a UNESCO World Heritage site best known for its Spanish-Baroque churches and its Mayan ruins. Christianity and Mayan culture intertwine around the Volcán de Agua, influencing local religious practice. Here, shaman Juan Mixtun Cuma (far right) — who heals people using plants grown nearby — performs a fire ritual, where he is focusing his attention on the volcano and asking God that it produce only positive energy for the residents of Antigua. 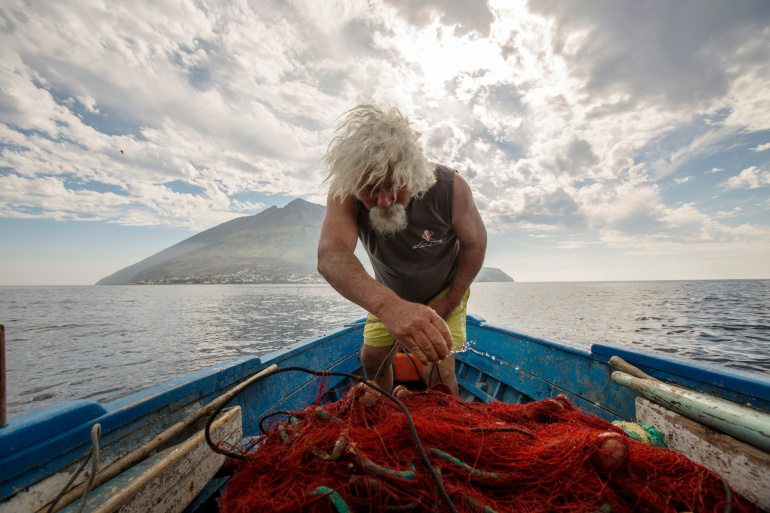 Three-thousand-foot-tall Mount Stromboli is part of the Aeolian Islands, a volcanic arc just north of Sicily in the Tyrrhenian Sea. Toala Olivares says, “In Stromboli, the volcano is named Iddu, or Him, by the Italians.”

Well, if Stromboli were an Italian man, he would be an extremely angry one — Mount Stromboli has been in almost constant eruption for the last 2,000 years. Its eruptions are small and frequent, occurring every 20 to 30 minutes and characterized by short bursts of lava with volcanic ash. Every several years, a larger eruption happens and lava flows down the side of the mountain, threatening vegetation and human life. Stromboli’s peak actually contains three active craters.

Here, Gaetano Cusolito throws water on the fishnet “as a symbol of respect towards nature,” says Toala Olivares. Fishing around Stromboli used to be an important part of the economy, but it dropped off as islanders moved to the mainland. Cusolito is one of only a handful of remaining fishermen, and tourism is the island’s major source of income. Due to Stromboli’s regular activity, visitors have a good chance of witnessing a burst firsthand — but they should stay at least 700 feet away from any emissions. 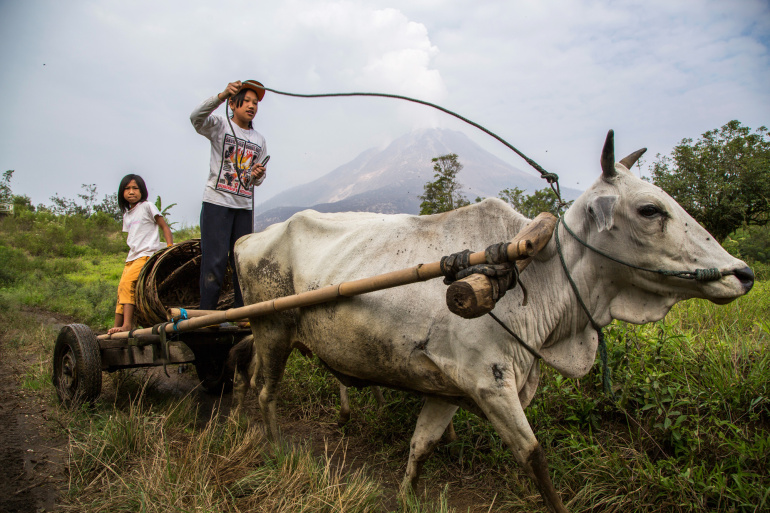 Here, two children use an ox to plow a field in the village of Berastagi at the base of Mount Sinabung, which rises 8,070 feet above them on the island of North Sumatra. Agriculture drives the region’s economy, thanks to the mineral-heavy volcanic soil. Yet the same volcano that makes the soil so fertile is the same force with the potential to destroy any farm within several miles.

For a long time, Mount Sinabung’s last major eruption was the stuff of history books — it occurred in the 1600s. But since 2010, it hasn’t stopped erupting. While some of its intermittent explosions have been relatively minor, a number have been deadly. The 2010 eruption killed two people; in 2014, the eruption took over a dozen lives and forced thousands of people to evacuate; and a 2016 explosion had seven fatalities. “The people believe that the mountain wants its territory back,” says Toala Olivares.

As the activity continues, the government is working to provide new homes for residents in the volcano’s path — but some aren’t willing to leave their productive and valuable farms (many of them are coffee farms). They face a difficult dilemma: move and protect their families members from potential harm in the future or stay and provide for their loved ones now. 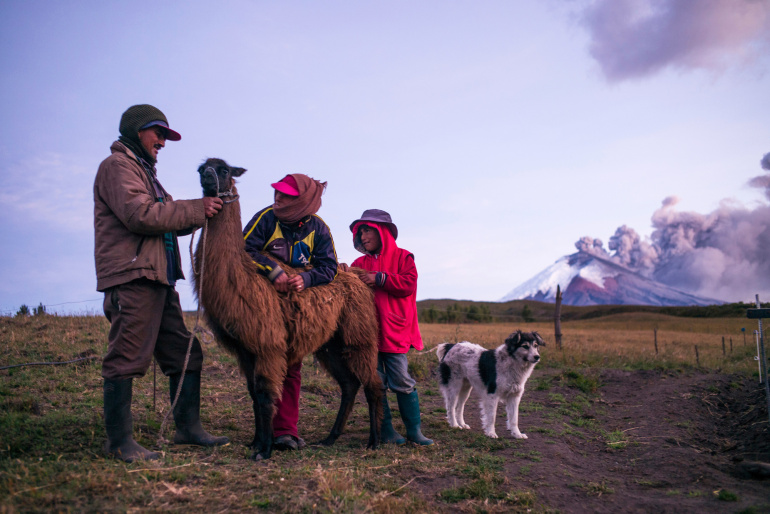 Here, Mariano Jarrin, his wife, Blanca, and their son Widison spend time with two of their animals: Martin, the llama, and Bobi, the dog. The family raises dairy cows and grows potatoes, lima beans, barley, ulluco and onions in the village of San Jose de Loreto Pedregal. Like the residents near Mount Sinabung, the area’s farmers depend on the rich volcanic soil for their harvests and grazing pastures.

At 19,347 feet, Mount Cotopaxi is the second-highest peak in Ecuador. It’s also one of the country’s most active volcanoes: it has erupted more than 50 times since 1738. Its most recent activity — minor earthquakes and some ash and smoke — occurred from August 2015 through January 2016.

“The situation is alarming, but I’m not afraid,” Jarrin told Toala Olivares. “I feel respect for the volcano, and I’ve learned to adapt and live with it.” He’s far from the only one — despite the threat of eruption, Cotopaxi is a popular peak for climbers. (The photograph of the child on the swing at the top of the gallery was also taken near Cotopaxi.) 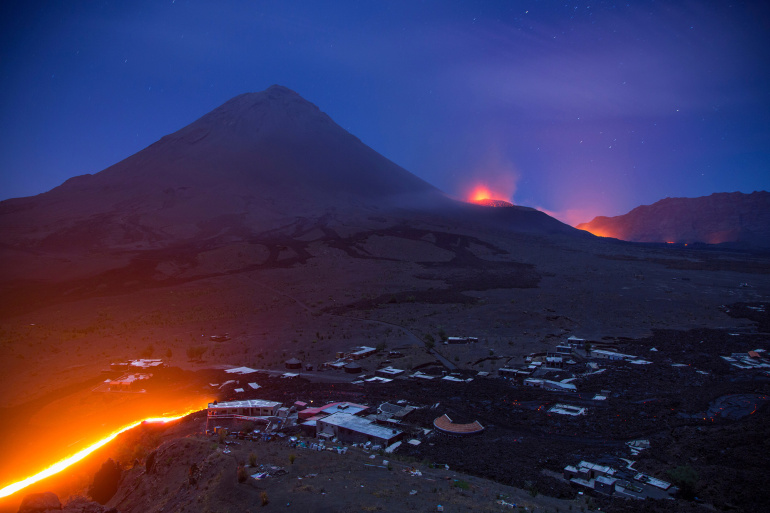 Mount Fogo, Cape Verde: Where people say, “I am born with lava”

Lava streams from Mount Fogo — which means “fire” in Portuguese — and electrifies the night. This active volcano takes up most of the island it sits on, which is also named Fogo. Fogo is one of the cluster of 10 islands that comprise the nation of Cape Verde on the northwest coast of Africa. More than 37,000 people inhabit the island of Fogo, and most of them make a living through farming — primarily growing grapes, vegetables and coffee.

This photograph of Mount Fogo was taken during its last major eruption in 2014, when many residents were evacuated. However, they returned as soon as they could. According to Toala Olivares, the people who live there say, “I am born with lava, and I will die with lava.”

All photos are courtesy of Cris Toala Olivares. To see more images, check out @ToalaOlivares on instagram. 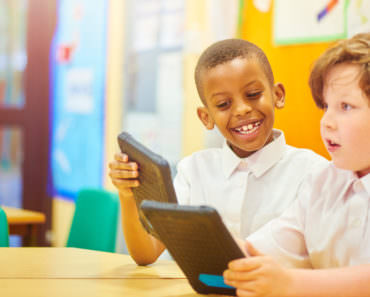 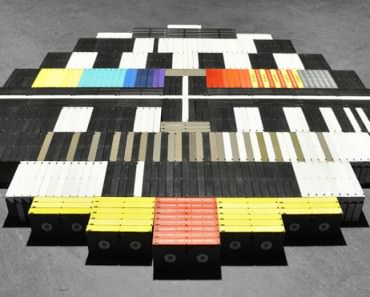