Home
Geek Universe
How Do You Make the World’s Biggest Connect-the-dots? |

Phil Hansen ended up using an amazing 52,901 dots to draw this portrait in a process that was anything but child’s play. On the way to setting a Guinness World Record, he had to solve many puzzles — and wrestle with some demons.

Artist Phil Hansen admits that, as a kid, completing connect-the-dots puzzles annoyed him. “I remember thinking, ‘Really, another soccer ball?’” he said. “It was so flat and boring.”

But he’s come around … because two-and-a-half years ago, he embarked on an ambitious mission: to go after the Guinness World Record for the biggest connect-the-dots drawing. Hansen (TED talk: Embrace the shake) has made his name by creating works on nontraditional surfaces (like banana skins and stacks of Starbucks cups) and out of unusual materials (matchsticks, hamburger grease, even hundreds of crowdsourced memories). But he had no idea the journey he was in for. Below, here’s what he learned along the way. 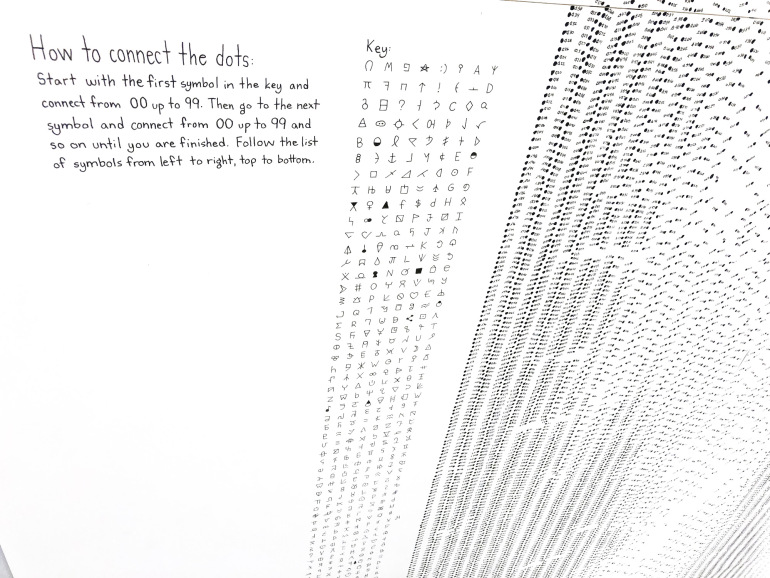 1. Every image is more than it seems.

Hansen’s first thought for this massive connect-the-dots was to do Georges Seurat’s pointillist masterpiece: “A Sunday Afternoon on the Island of La Grande Jatte.” “It both worked and was interesting,” he says, “but it also felt a bit stiff.”

While searching for inspiration, he went to Joshua Tree National Park in California. There, on daily hikes, he found himself thinking about photographer Edward Curtis, who set out to document the lives of Native Americans in the early 1900s. Over a 30-year span, he visited 80 tribes and took an astounding 40,000 photographs for what became a 20-volume set called The North American Indian. “I remember always liking those images,” said Hansen, who felt especially drawn to Curtis’ 1905 portrait of man named Big Head.

That was the one, he decided. Hansen returned to his studio in Minneapolis and got started. And then things got complicated.

“There I was making the piece, when I read that Edward Curtis was looked on poorly by some people because he would edit his photographs to make native people look more ‘native,’” says Hansen. “He’d edit out things like clocks, or have people wear headdresses or beaded clothing from a different tribe if they didn’t have any. I began to realize that I grew up in a culture that edited Native Americans. And I was a product of it.”

He thought back to being a boy and watching Westerns with his dad and grandfather and running through fields playing “cowboys and Indians,” and about the media coverage on the protests at Standing Rock, which were happening then. He says, “I found myself thinking about all the little things in our culture that slowly built this image of who Native Americans are.” All of a sudden, he realized that his seemingly-whimsical piece was part of a larger cultural conversation about whose voices are heard, whose are silenced — and whose are simply imagined. 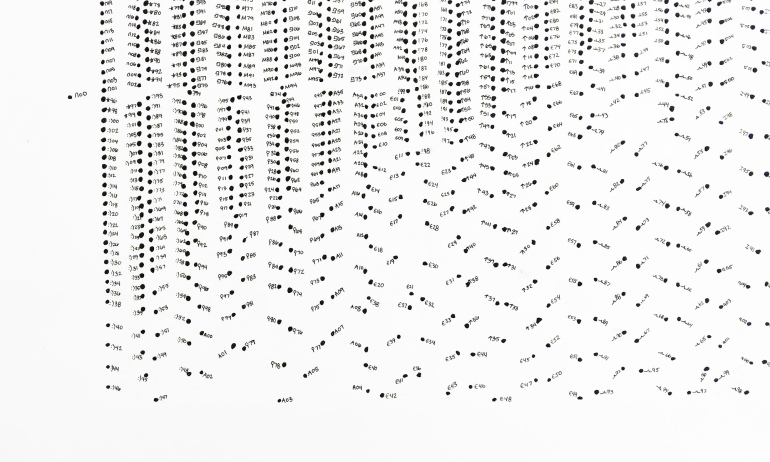 2. Your inner child can work with your outer adult.

Hansen saw an irony in the fact that, in taking on a childlike art form, he chose to do an image of the elder Big Head. “I was drawn to that older face. I liked that kind of skin, that texture,” he says. “It’s the classic image of Native Americans many of us have — a person who looks wise.”

He also liked that the image was personal and nuanced, compared to the overly simplistic connect-the-dots he did in childhood. “I’d look at one and think, ‘Oh, that’s the Statue of Liberty. Oh, that’s a teddy bear,’” he recalls. “There was no mystery.” He hoped to subvert that by crafting a piece where the image could be seen by someone only after they’d joined all the dots. Hansen spent a while playing around with how to do this, and he thought he’d landed on a method that worked for obscuring the final image until it was solved. But he says, “There were just too many hurdles.” He scrapped that requirement and started over.

Only to face a new problem: working with dots and no lines, how could he create the kind of shading and detail that Big Head’s portrait demanded? Hansen found a solution by tapping into his inner child — he started scribbling. “I found myself scrawling these jagged lines and spacing out the zigzags to make the image lighter or crunching them in to make it darker,” he says. “I started to see that if I had rows and columns of dots, I could create a surprising amount of detail.” Using this method where some areas had tons of dots while others were much more sparse or even empty, he realized the dots themselves could render out a complex, detailed image.

3. Any big problem is just a series of small problems.

Hansen says that, in the middle of the process, he experienced a dark night of the soul. “I thought, ‘Am I really going to be able to do this?’” He knew he wanted the piece to be 10 feet by 10 feet, but he struggled with how to pack in the dots while still making the image beautiful. He needed more than 9,000 dots to beat the world record set in 2001 — but he really wanted to exceed that by several orders of magnitude. Landing on a system of rows and columns was key, as it showed him how to space out the dots to create airiness and where to pack them in for density.

Soon, Hansen ran into another challenge: how should he number his puzzle? With more than 50,000 dots, most of the numbers involved were five digits long. “Standing back, it just looked like a big line of grey,” he says. “Each dot was taking up more and more space.”

His solve can be seen at the bottom left of the piece. “I ended coming up with a whole coded system that has a key you follow,” says Hansen. The key moves you through 500 symbols: triangles, square, letters with special squiggles. Each symbol is numbered from 1 to 99, and when you get to the final number in a symbol’s sequence, you move on to the next symbol in the key and do the same. This system allowed each dot to be numbered with just three handwritten marks.

4. There is a certain joy to be found in tedium.

With all his planning done, Hansen and his team began to execute the piece. His work surface: 12 sheets of posterboard, glued together. He chose a fine-tipped pen for the numbering, and Copic Markers for the dots themselves. He says the act of drawing the 52,901 dots was strangely meditative. “As a kid, you’re always trying to figure out what’s different and special about you. I realized in high school art class that I have a lot of persistence in me,” says Hansen, whose pieces often involve repetitive motions. “Whenever I’m doing these long, boring tasks, that’s where I get to think about life.” As he shared in his TED talk, Hansen has a hand tremor, so he brought in two assistants to help keep the numbering neat. One worked through the day; the other through the evening.

It took Hansen and his numbering team more than 300 hours to finish the piece. When it was complete, he contacted the Guinness Book of World Records. Guinness officials asked for documentation of everything — the column system, the numbering key, images of the actual making. But there was one big thing they demanded before they could approve the record: They needed to see someone solve the puzzle. Hansen hired a colleague, Tyler Zwirtz, to do this. Together, they covered the image with transparent film and built a video rig for Zwirtz to wear on his chest to capture each line he drew for Guinness, up close. The solve took a total of 19 hours, split over several days — all with Zwirtz wearing a gas mask, due to the marker fumes. But the puzzle worked! 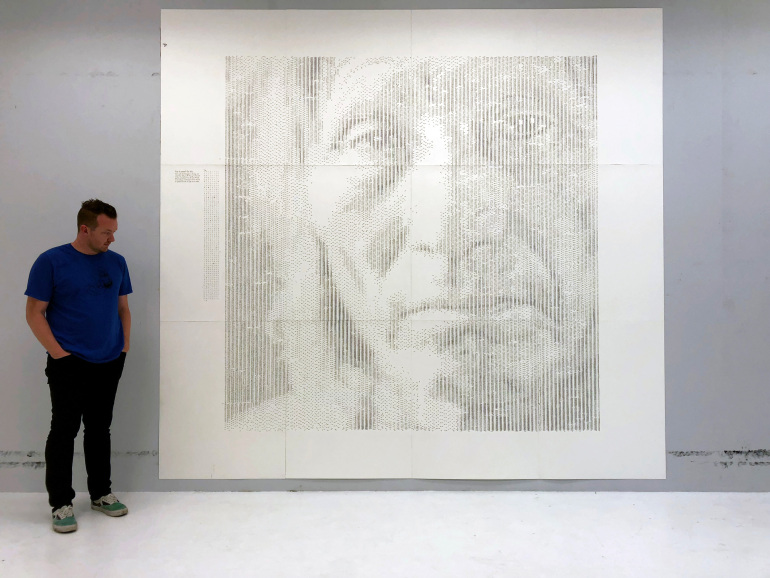 5. While achieving a world record is great, it doesn’t hold a candle to the experience.

It took a few months for him to hear back from Guinness, says Hansen. When he finally did in the fall of 2017, he received a “generic form email that said, ‘Congratulations.’” He got a gold foil-stamped certificate in the mail shortly after. “Simultaneously, setting the world record means absolutely nothing — and it’s pretty cool. The kid in me is gleeful; the adult in me thinks it’s a little dorky,” says Hansen. “But the image, that’s the part where I feel, ‘Wow, this is cool.’ It’s just mammoth. I stand in front of it and think, ‘Whoa. That’s nuts.’”

Hansen says it’s all the work that went into the puzzle, his deeper thinking on his relationship to Native American culture, and his memories of all the problem-solving involved that feel most meaningful. Overall, the piece — which is now in his Minneapolis studio — says something he never could have articulated when he started.

“So many of our beliefs and perceptions are taught to us — we never really sit down and question them,” explains Hansen. They’re built out of bits and pieces of information that we absorb through our lives; they are the ultimate exercise in connecting the dots. “It’s exactly what I didn’t like when I was younger — that you just go along and don’t have a lot of say in the process. And here I was following that same path.”

All images courtesy of Phil Hansen.

Curious to try Phil Hansen’s epic connect-the-dots? Go to PhilintheCircle.com to download a set of PDFs that you can bring to a printshop so you can have your own 7-foot-tall copy to solve at home. 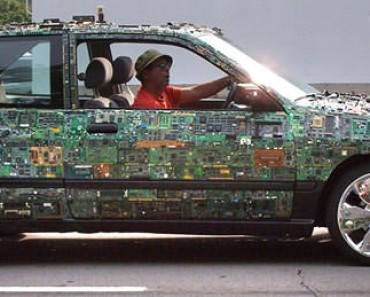 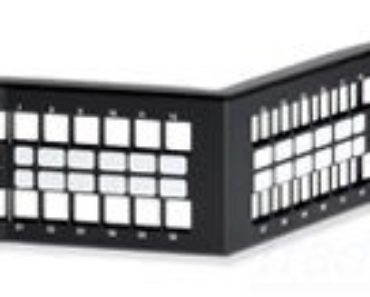