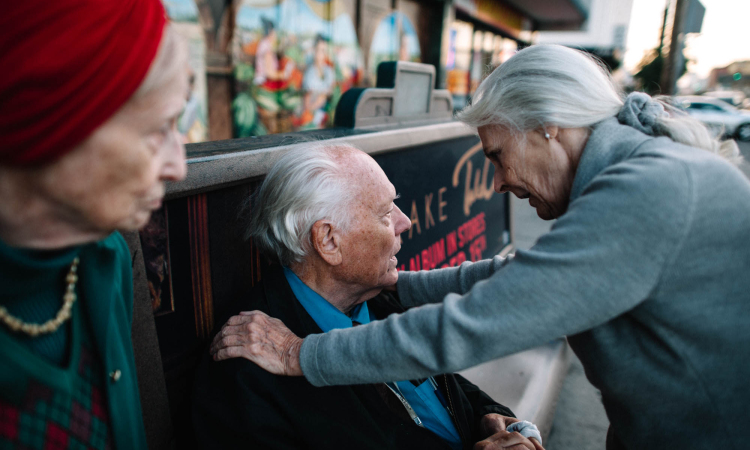 In the stark sunlight and shadows of palm-lined, chain link-fenced Los Angeles, one man and two women — all elderly — walk hand-in-hand, embrace in parking lots, eat in diners, and lie down together at home.

Meet Will, Jeanie and Adina, three people whose lives intertwined at the ages of 84, 81 and 90, respectively.

Isadora Kosofsky, the person behind the camera, was only 17 and already an experienced documentary photographer when she befriended the trio in a Los Angeles retirement home. At the time, they were at the start of their story together. She embedded herself in the group and captured their lives in deeply intimate photographs, taken over the course of four years.

Until now, Kosofsky, a TED Fellow, has shared this story only in magazines and in her TED talk. Now she’s gathered the materials into a new book, Senior Love Triangle. This volume charts the unfolding of their relationship dynamics through images, as well as snippets of dialogue and spare observations recorded by Kosofsky in handwritten notes. In an afterword, Kosofsky writes of her experiences as an observer and offers an epilogue to their story.

Senior Love Triangle is now on the big screen, too. In collaboration with Kelly Blatz, an actor, writer and director, Kosofsky has transformed the trio’s story into a feature film: a dramatization with actors that draws upon the facts. It’s won Best Feature at two film festivals, and Kosofsky and Blatz have received an award for Best Writing. (The film is available to stream online.)

In the following conversation, which has been edited for length and clarity, Kosofsky tells TED what it was like to be immersed with Will, Jeanie and Adina in their unconventional and extraordinary romance:

My early teens were a difficult and painful time. At 13, I was contending with post-traumatic issues and a family that had fractured entirely. I didn’t want to live. I regularly ditched school, going to a coffee shop in the mornings where I knew truancy officers wouldn’t find me.

I was looking for connection. There, I met a woman named Bianca. While she was having breakfast and reading a newspaper, I asked if I could take her portrait. One day, she approached my table and asked me, “Honey, what do you want to do with your life?”

I told her, “I want to be a documentary photographer.” And she said, “Honey, good. You’ll never be lonely.”

That was the beginning of a 13-year friendship. Shortly after we met, Bianca was diagnosed with dementia and moved into a retirement home in East Hollywood, California. I began documenting the residents there, and three years later, I met Jeanie and — through her — Will and Adina. When I was having dinner with Bianca, she motioned to Jeanie, who was across the room talking to a man, and called her a flirt. I immediately felt connected to something in Jeanie.

I recognized that part of me that has auditioned for the role of “special” in men’s life.

Jeanie was a theater actress from New York’s Lower East Side; Will, a World War II veteran and print shop owner from New Jersey; and Adina, a Holocaust survivor and linguist who was born in Switzerland. By the time we met, Will and Adina were already in a relationship, which had begun in a different retirement home. When Will was forced to move to a different facility — the one where Bianca and Jeanie lived — he and Jeanie fell in love. Not wanting to let go of either relationship, Will initiated spending time with both Jeanie and Adina simultaneously, and the three formed a trio.

Jeanie was not accepting of the dynamic at first, but ultimately, she and Adina formed a friendship that ended up being closer than their bond with Will. I think their kinship was forged through their mutual experience of being attached to him for a substantial amount of time. There was never a conversation among all three about their  relationship — ever.

But you can see their attitudes in what they say. Jeanie said, “To share Will is a thorn in your side. A relationship between a man and a woman is private. It is a couple. Not a trio.”

Will’s attitude was that they were living “above the law.” As for Adina, she held a different perception of relationship, perhaps. She was a linguist who spoke five languages, but she didn’t always express herself in words. When I asked her what she thought of their arrangement, she never wanted to elaborate or define.

She did once say, “There are many different kinds of love.” And I feel that’s enough of an insight.

We took the bus a lot or walked. We spent a lot of time in the same coffee shops or restaurants. I’d just sink into whatever environment we were in and assume my position on a chair or on the floor.

They were so absorbed in their dynamic that I really became secondary, if not invisible, in so many moments. It just became natural and organic that I was there documenting.

I sat with Jeanie for hours at a coffee shop in East Hollywood or in her room. I used to ride the bus with Will with my camera in my bag. We’d just sit for hours in traffic, and I would listen to him. I think that really speaks to the fact that the documentary storytelling approach is 95 percent presence and 5 percent executing a story.

Of all the people I’ve ever worked with, Will, Adina and Jeanie were the least concerned about the documentation. They valued the photos when I showed them the images, but they were more interested in me as a human being, as someone who was in their lives. Photography, for them, was just a part of who I was, and part of my time around them. They understood what I was doing. But they really felt more connected to me than they were to anything related to the project.

There’s been such a focus on age in this story, in the context of them being elderly and me being so young. But from my perspective, age couldn’t have been more irrelevant — we saw each other as peers. Will, Jeanie and Adina didn’t care how old I was. They never talked about it or referred to me as a young woman or aa surrogate granddaughter.

While there was a profound intergenerational connection, I did not create my work from that sensibility at all. Will saw me as a friend. He saw me as somebody who was there with them through the myriad conflicts, reunifications, ruptures, disconnects and moments of profound intimacy. They never spoke to me as though I was somebody who lacked the wisdom associated with age; they just spoke to me the way they’d speak to somebody else who was in the retirement home with them.

Their relationship came to an end after Adina ended up in hospital — Adina’s son alleged that Will had pushed her down a flight of stairs. Her son did not want Adina and Will to interact anymore, and he warned Jeanie about Will’s rageful, abusive conduct. We didn’t want to believe that Will was capable of that.

A few weeks later, Jeanie’s son picked her up. I received a phone call from him, saying that Jeanie had a broken nose (although she told him she’d walked into a divider). Her son didn’t believe her. He moved her to another facility, where she developed dementia and went on to live with her family outside of Los Angeles.

The three of them never saw each other again.

Adina was moved out of state to live with family, and Will was evicted from his apartment, having lost all his money in a scam. He moved into a Veterans Administration shelter, where he passed away. I was able to locate his grave only after two years of looking for it. I visited and talked to him about the book and the film, leaving flowers and photos. Adina has also passed away. Jeanie is the only one still alive, but she doesn’t remember a lot of this time period.

We made the film about Will, Jeanie and Adina because I felt deeply — and I still do — that their story needed another life. I wanted to articulate parts of it that weren’t fully developed in the photo documentation or my writing. There was so much about loss, mental health, betrayal and domestic violence that I couldn’t articulate for one reason or another in the photos.

The film was shot in April 2018, over a one-month span in Los Angeles — a lot of it in East Hollywood, where their lives occurred together. It’s a scripted fictional film with actors, not a documentary feature. It’s a totally different medium and gives their story a new life in another form.

Part of me just wants to relive these three people over and over. I think I struggle with goodbye — that’s why I’m a long-form documentarian. It’s allowed me to continue with people. Once you have me in your life as a documentarian, you always have me.

Documentary photography is a slow-cooker approach to storytelling. Often, I spend months and years with people, sitting with them in their life trajectory, in their spectrum of feelings and vulnerabilities and difficulties.

At some point in the process, it becomes totally irrelevant that I’m there. If you read the conversations among Jeanie, Will and Adina, they were raw and uncomfortable. If they ever felt impacted by my presence, I don’t think they would have interacted the way they did.

Who you decide to document is an incredibly personal choice. It’s not objective. I am guided by an inner compass. Will is the spitting image of my father, and it’s hard to overlook that. He would have rageful episodes where he taunted Jeanie in her face — that was the first time I ever saw somebody fly into a hateful rage like my dad.

Yet a documentarian doesn’t just choose her subjects, either; they choose you. I was 17, and Will, Jeanie and Adina saw power in me that I couldn’t see myself at that point. There was the sense that we all decided through our respective agencies we wanted this to be a reality.

People feel uncomfortable looking at these images, but they return to them again and again. I think it makes them reflect on the complex nature of their own relationships. They want to know, for example, if what Will, Adina and Jeanie were experiencing was love.

I’ve asked myself that a lot, too, and in the essay that closes the book, I ask whether the question “Was it love?” is even the right one to ask. Certainly, there were a lot of different emotions and attachments at play — but I don’t have an answer to that particular question. I don’t think I want one. I just want to let it be, even though it’s hard to allow myself to navigate something emotionally and not know what it is or have it contained or categorized.

This story has taken on a life that I never imagined when I was working on it. I pursued it because I felt a profound connection with the people involved. I really, truly didn’t believe that this work would resonate with as many people as it has.

With the pandemic, the film is more relevant than ever.

We need humanistic stories about mature adults. Long-term care facilities are the epicenters of the coronavirus, and  nursing homes are the front line. A long-standing view that older people are dispensable has been clearly highlighted now.

Our elders are indispensable. I have always felt that senior rights are a forefront social justice issue, yet it’s largely untouched by activists. I suppose senior rights aren’t sexy. This needs to change.

The book is a literal turning of a page, a conclusion in their story and in mine. Will, Jeanie and Adina taught me that sometimes truly loving someone means not being in their life anymore. 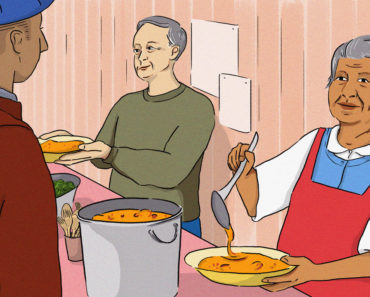 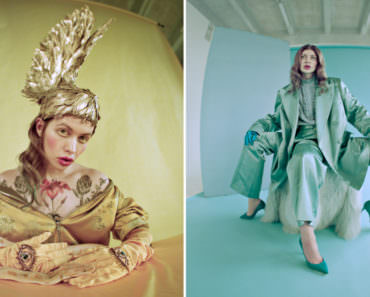